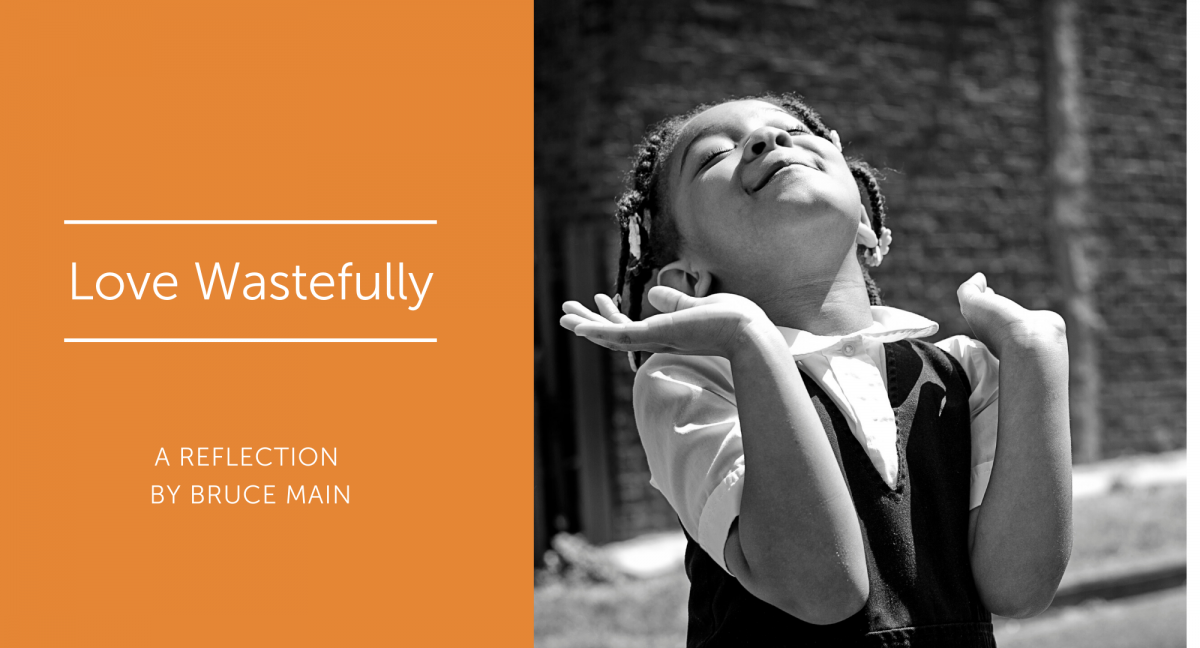 The reporter held the microphone close to the retiring bishop’s mouth.

“If you were to boil it down to a few words,” he curiously inquired, “what should define Christian behavior?”

The aged cleric stroked his scrappy beard. After decades of ecclesiastical service—baptisms, funerals, communions, weddings—he was in no rush to answer the impatient young journalist.  Silence lingered for a few painful seconds.

“Christians,” he finally replied, “Christians....are people who love with waste.  We are called to be wasteful lovers.”

These words created some dissonance for me as a young seminarian, having never put love and waste in the same sentence. Growing up in a household that frowned on throwing anything away, I developed an early aversion to waste. My lunch bag was a recycled Oreo bag—with an old mayonnaise jar doubling as a thermos for my powdered milk. I was even expected to bring them home every day from school...so they could be used again and again! “Waste not, want not”: a mantra seared into my consciousness.  I still have problems throwing away a Starbucks cup.

But here was a retiring man of the cloth saying the essence of Christian behavior is to love wastefully?  Shouldn’t love be invested like a good mutual fund? You know, sprinkle it around, minimizing risk, making sure we get the best return on our investment? And what about stewardship? Why would a clergy propose to “waste” anything—especially love?

The Easter story is really a story about wasteful love. It begins with an unknown woman sharing her most valued possession and ends with a man laying down his life for others. Scholars actually suggest that the first authentic Christian in scripture is the anonymous woman in Matthew’s gospel account called The Anointing at Bethany. She’s the only one who understands what’s really going on, generously surrendering her expensive perfume and preparing Jesus for what’s coming next: his death and burial.

“Why this waste?” protest the disciples with righteous indignation as she anoints Jesus. “This perfume could have been sold at a high price and the money given to the poor.”

To everyone’s surprise, Jesus doesn’t agree with his buddies. He doesn’t throw the woman under the proverbial bus or dismiss her gesture as foolish sentimentality.  Jesus actually elevates her action, offering a less than subtle rebuke: “She has done a beautiful thing for me...and her story will be told forever.”

Once again the disciples miss the point. They fail to see the heart behind the act. It’s easy to do. As the leader of a non-profit, who spends much of his life asking for donations, I can identify with the disciples. Sell the perfume on eBay. Get the cash. Make a significant donation to your local food bank.  That’s practical. But I miss the point. I miss the heart.

I meet a lot of amazing Christians in my travels. In general we do a pretty good job of loving. But often our love is a practical, appropriate, boundary-abiding, a get-something-in-return kind of love. It’s love, but often safe and calculated.

Jesus is different. He’s a threat to those in power. Why? I argue that he can’t follow the rules of those who determined who should and shouldn’t be loved. His heart was too big. His love knew no boundaries. His love could not be contained by religious, social, ethnic and geographical barriers of his day. So he made enemies. It cost him his life.

And this is part of Easter’s life-giving message of Hope. We invite this resurrection power to enter our sometimes small, crusty, fear-filled, boundary-abiding hearts and liberate us to love—wastefully. 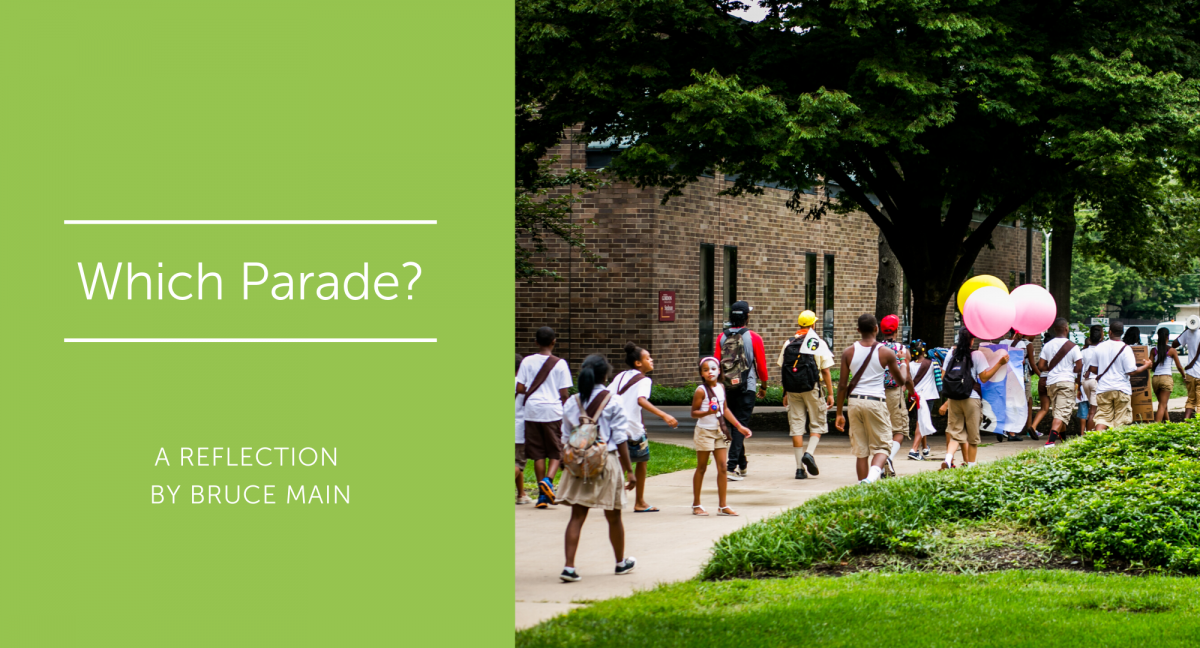 One of the most dramatic and overlooked aspects of the Easter story is the triumphal entry of Jesus into Jerusalem.

Jesus enters the city from the east. Scholars tell us of another procession coming from the west: the port city of Caesarea.

During Passover the city of Jerusalem swelled from 40,000 to 200,000. For an insecure, Rome-appointed political leader—whose charge was to keep his Jewish subjects "in check"—Pontius Pilate sent a Roman garrison of soldiers to fortify the troops permanently stationed in the holy city. Civil unrest would jeopardize Pilate’s appointment.

The parade from the east was markedly different. Instead of spears...palm leaves. Instead of well-groomed soldiers...poorly dressed peasants. Instead of order and precision...chaos. Instead of military cadence...shouts of Hosanna in the Highest.  And Jesus, the man leading the procession, rides a humble donkey.

The vivid contrast between the two parades was more than simple pageantry. It was also a contrast of world views, of vision, of mission.

The parade from the west was guided by imperial power and theology. Rome was more than just a city--it was a belief system.  Its message was simple: Might makes right! The first shall be first! Intimidate! Consolidate power. Use the poor to your advantage. To the onlooker, Rome seemed invincible. Secure.

In stark contrast, the Jesus parade was guided by a vision laid out in his earlier teachings: greatness is found in humility, true life is found in surrender, love your neighbor, care for the poor, share, be agents of healing, peace and grace....

It's no accident that these two parades arrive at the city at the same time. Nothing is accidental with Jesus. Jesus wants you and me to make a choice between two conflicting parades. And following the Jesus parade takes faith—especially in times of fear and uncertainty.

This is an extraordinary moment in our history. We enter Holy Week with our world literally turned upside down, our heads spinning in disbelief and our feet looking for a stable place to stand. I’m sure the disciples had similar feelings as they followed their donkey-riding leader to the cross.

The Good News of Palm Sunday is we know our parade is the real deal—it’s the parade that endures and lives generationally in those who follow Jesus. Yes, it gets darker before it gets better, there is pain, betrayal, and moments when the light seems to disappear. Hang on. Keep walking. Keep living the vision. We know how our parade ends. It’s the parade that continues to change lives and change our world.

God’s courage and peace as you journey this week.