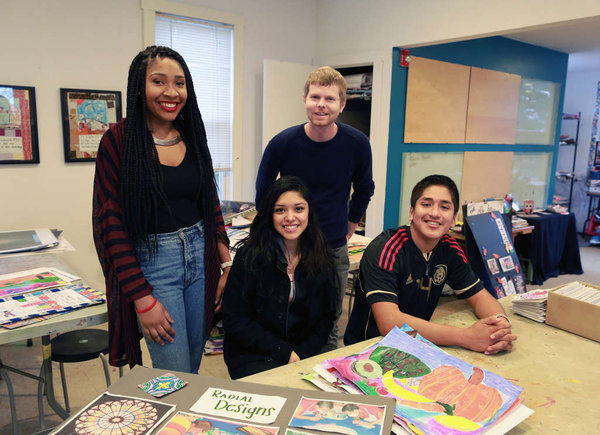 When students at Camden's UrbanPromise Academy high school learned they would have the chance to design Christmas ornaments to be displayed on New Jersey's tree in Washington, they wanted to reflect the range of cultures in the city and the state.

So they drew religious symbols, as well as pictures to represent racial diversity, peace, and harmony, such as a world map and two hands holding.

"I think it's an honor," said Chinyere Nwanosike, 16, one of two dozen students who created an ornament. "We wanted them to turn out as nice as we could."

The 24 ornaments will adorn one of 56 smaller trees representing U.S. states and territories that will surround the national Christmas tree in President's Park near the White House. After the tree-lighting ceremony, which is set for next Thursday, visitors from all over the world will be able to see the students' work.

The state's first lady, Mary Pat Christie, selected the school for the project earlier this year after seeing some of the students' earlier artwork, said art teacher Robert Kelleher.

"These beautiful stained glass ornaments crafted by UrbanPromise Academy students truly demonstrate the spirit of hope and promise they have for the future," Mary Pat Christie said in a statement. "The governor and I are so proud these works of art, which reflect the Garden State's cultural diversity and spirituality, will be showcased on the national stage this holiday season."

UrbanPromise Academy, a private Christian school in East Camden, was founded in 1997 and serves about 50 students.

Kelleher said his 10th- and 12th-grade students were inspired by Marc Chagall's Peace Window, a stained-glass artwork on display at U.N. headquarters in New York, which they studied this year. They decided to design their ornaments in a similar stained-glass style and drew their designs first on tissue paper.

Students have art class twice a week, and Kelleher said many of them ended up coming in during study hall or their free time to make sure they finished.

"They were really motivated to get them just right," he said.

The school sent the ornaments out to have the designs transferred to hard plastic orbs. Once they got the ornaments back, the students painted over them with a clear topcoat to enhance the shine.

"They actually turned out pretty well," said Jennifer Lopez, 16, who designed an ornament featuring a Japanese symbol for peace. "They look like glass."

By Allison Steele, The Philadelphia Inquirer