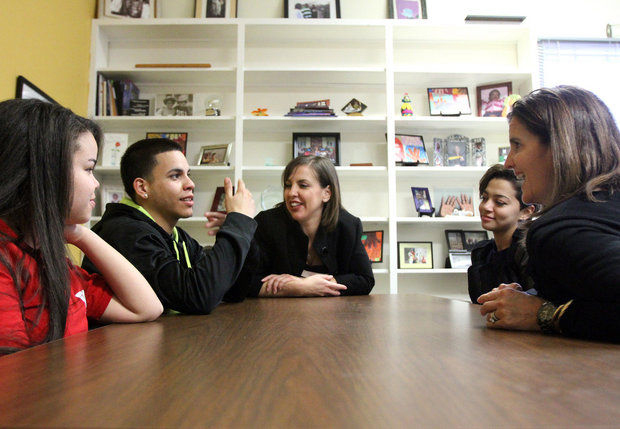 First Lady Mary Pat Christie traveled to the Camden area Wednesday to award the head of a faith-based community center and school with the New Jersey Hero prize.

Christie, who has honored 25 other “New Jersey Heroes” within the past five years of the program, also presented Urban Promise Executive Director Jodina Hicks with a $7,500 check, which she said will be used to benefit the organization.

“You guys are doing some truly amazing things here at Urban Promise,” the first lady said, addressing the counselors and children assembled at the community center. “I am humbled when I see these programs in our state, and I like getting the chance to spotlight them for more people to see across the state.”

Founded in 1988, Urban Promise offers free after-school programs, summer camps, job training and other services to children and teenagers, the majority of whom hail from Camden. The non-denominational Christian organization also maintains a middle school and high school, which charges a $2,500 per year tuition.

It is the largest employer of teenagers in Camden, according to Hicks, paying minimum wage, and sometimes more, to “street leaders” who help students with homework and otherwise act as mentors in the summer camp and after-school programs. This summer, the organization plans to hire 80 to 90 more teens.

While it’s mailing address is in Pennsauken, Urban Promise practically straddles the township’s border with Camden, and is located just blocks away from the city’s Woodrow Wilson High School.

“Looking up the definition of hero before, I thought that it fits perfectly with Camden, and for Urban Promise,” said Hicks, accepting the New Jersey Hero award and $7,500 check from Christie. “It means to show courage in the face of adversity, and I think that’s exactly what people here are doing.”

Later, Hicks said she could think of two Urban Promise programs that could benefit from the extra influx of money.

Christie’s New Jersey Heroes program, first initiated by Gov. Chris Christie five years ago, is designed to highlight “positive and unique ways people and organizations are impacting” others throughout the state, according to representatives for the first lady.

Applications for prospective “heroes” are collected and reviewed by a committee, Christie said. She does not choose the eventually winners, but instead presents the awards across the state.

Urban Promise and Hicks are the first recipients of the award in Camden County.

“This allows me to highlight programs that benefit our youth, which is something we should be celebrating,” said Christie. “It also creates a network of heroes, and they can connect with each other to discuss best practices, and it allows them to apply for additional state grants. So, there is a real benefit to being named a hero.”

Before presenting the award to Hicks, Christie toured Urban Promise's two centers on Rudderow Street, and met with students, faculty and street leaders.

Brent Lebman, the child ministries director for the after-school program, was among those in the raucous common room — filled with children and teens loudly chatting and playing — when the first lady entered.

“Jodina getting this award is only fitting — she’s a hard worker and is very dedicated,” he said.

Asked what he hoped Christie would take away from the visit, Lebman said he wants more people to have a better understanding of the people of Camden.

“I think Camden gets such a negative reputation, that people miss that kids are kids, and these are great kids,” said Brent, himself a Camden resident. “I hope she sees human beings here, and that there’s a lot of love here.

“Rather than a wasteland, I hope people see diamonds in the rough, and not give up on us.”