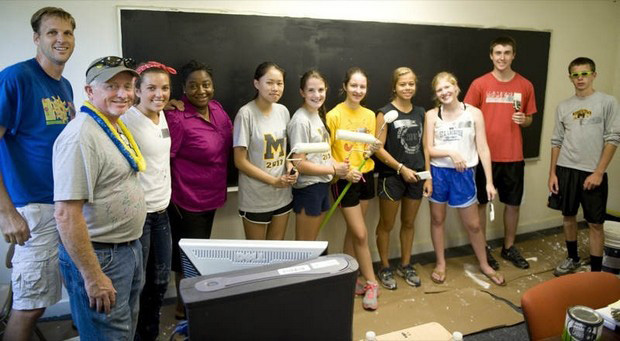 You can help us by purchasing an item from our EMERGENCY WISH LIST or by making a DONATION (please select "water damage" under the "program" option.)

PENNSAUKEN — In their last week of summer vacation, hundreds of Moorestown High School students volunteered their time Monday to clean up flood damage at a private school on the outskirts of Camden.

The CamdenForward School, run by the non-profit UrbanPromise in Camden, sustained flood damage to several classrooms during heavy bouts of rainfall over the past two months.

School was supposed to begin Monday, but Jodina Hicks, executive director of UrbanPromise, said the opening has been postponed until next week.

Most of the items deemed unusable were thrown away. Hicks said they amounted to more than $15,000 worth of books, equipment and materials.

The water damage also caused mold in some parts of the school.

The remedy for that, completed five days ago, cost the cash-strapped Christian school another $15,000.

“Then we found our insurance would not cover the damage,” Hicks said. “We had nowhere else to turn. We had to ask for help.” 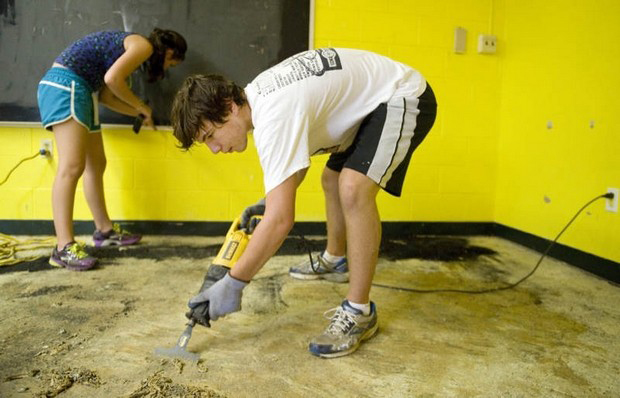 Her first call Friday morning was to Jim Dugan, a volunteer for UrbanPromise who has led efforts to help those affected by Hurricane Katrina.

Dugan, who runs mission trips for a youth group at a Moorestown church, got right to work.

“During my bike ride, I went over to the high school and talked to the coaches I knew and we had a plan to bring 40 to 70 kids here a day to help,” Dugan said.

Volunteers started as early as 7 a.m. and worked until 6 p.m.

“Faith without works is dead,” Dugan said, quoting the Bible.

Emily Brown, a junior at Moorestown High, worked alongside Dugan this summer during the Appalachia Service Project mission trip.

“I’m here to help any way I can,” Brown insisted. The 16-year-old works at Wegmans and asked her managers to donate food and water for the workers.

Austin Peck, a 17-year-old senior at Moorestown, was in one of the damaged rooms ripping up carpet and then scraping the glue left on the floor.

“We are working together to get as much done in the time we have,” Peck said as he wiped the sweat from his face.

“It is just my nature ever since I was a kid,” said Ways, a 25-year veteran of the force and city native. “I want to give back.”

Along with those helping inside the building, local churches have donated funds to help replace curriculum materials.

Pastor Steve Winkler of The Protestant Community Church of Medford Lakes dropped off a check for $1,800 Monday. School officials said they expected another $1,000 check from the congregation later in the day.

“The support we have gotten from the public is overwhelming,” said CamdenForward Principal Denise Baker.

“Without them I don’t know what we would have done.”