IN THE NEWS: UrbanPromise: Moorestown has long supported betterment of Camden
Saturday, January 12 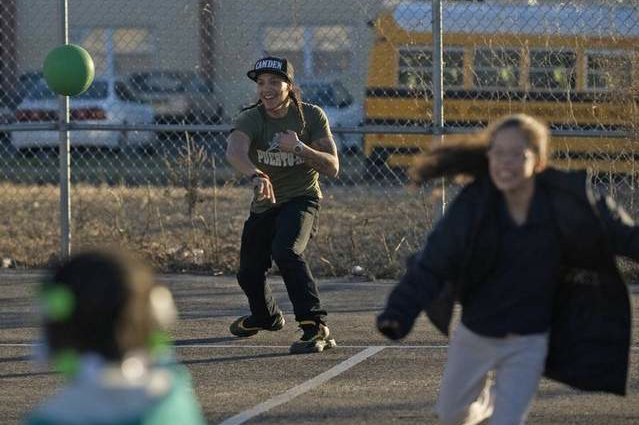 As small, wooden crosses were erected in a grass park outside Camden City Hall with alarming regularity last year, a similar memorial to the city’s homicide victims sprang up in wealthy Moorestown.

The township’s memorial was 10 miles and a world apart from the streets where Camden’s record number of homicide victims were cut down in 2012.

But Money magazine’s best place to live in 2005 is no stranger to the struggles of those living in one of the worst.

For decades, Moorestown’s churches, schools, civic organizations, business leaders and families have without much fanfare supported efforts to better the city, through both donations and countless volunteer hours.

“The common denominator is this belief in children,” said Jodina Hicks, executive director of UrbanPromise, where the single-largest base of contributors for the Camden nonprofit has long been centered in Moorestown.

Moorestown’s support of UrbanPromise, the faith-based ministry that offers sundry services to Camden youth, began with a few individuals more than 20 years ago. It has swelled to entrenched support from a half-dozen Moorestown churches, businesses and civic groups. Churches and private donors help pay the tuition for youngsters at UrbanPromise’s two schools.

Moorestown youth complete UrbanPromise work projects in Camden and volunteer with summer programs. The township’s high school students currently help tutor in the city. The 100-member Rotary Club of Moorestown donates new coats to Camden kids and once bought new uniforms for a middle school basketball team in the city.

From 2008 to 2010, the rotary sponsored an after-school art program at the Sacred Heart Elementary School. Then a chair of a rotary service committee, Micki Ginsberg remembers the weekly classes as “magic.”

“What a wonderful way this was to expand the horizons of children. We felt like it was that idea of helping one student at a time. Even if they weren’t going to be artists, they learned beyond their borders.”

The connection between the two towns made national news in 2007, when ABC’s “20/20” compared comfortable Moorestown kids with poor youth who live minutes away in Camden. Anchor Diane Sawyer highlighted UrbanPromise, and the gap between two polar opposite towns narrowed.

But for Carol McWilliams and other Moorestown residents, the connection to Camden goes farther back than the Sawyer segment.

Two decades ago, UrbanPromise was a fledgling ministry trying to establish after-school programs for children. Hicks describes McWilliams, of Moorestown’s First Presbyterian Church, as an early “champion” who came into the city every day to help establish those programs.

“She got Moorestown to embrace UrbanPromise,” Hicks remembered. “For someone like Carol to be so believing and investing in the work ... was pretty amazing. She got her church to support every single new ministry or program that we have started up over the years.”

McWilliams, the church’s missions coordinator, said her work in Camden stems from a strong faith commitment and knowledge of the need that exists.

Perhaps nowhere has the tie between the two towns been more entrenched in recent years than around the kitchen table of a Moorestown accountant and his wife. It was there at 6 p.m. dinners that Doug and Candace Sell and their adult children decided to make a 16-year-old Camden teen part of their lives.

Late in 2010, Louis Santana was heading back to prison when the couple stepped in. Doug Sell had met the teen the summer before at an UrbanPromise program and he made a bold pitch to the juvenile court judge hearing Santana’s case: Instead of sending the teen to a juvenile prison for three years, put him in the Sells’ custody.

The judge consented and Santana has lived for the past two years with the Moorestown family.

“They didn’t just take him in,” Hicks said of the Sells. “He is their fifth child and that’s never been questioned.

“They just really love him.”

Doug is understated about the commitment, joking that Santana is “doing hard time with the Sells.” But for a teen who grew up providing for himself on the streets, a structured suburban family represented a world of change.

“Eating food at a dinner table at 6 p.m., I thought that was like a TV thing,” Santana said. “I never got to experience that until I started living with Doug.”

With his mother imprisoned at age 11, Santana’s early life was spent hanging around corners where at least a dozen of his friends have been killed over the years.

“I just thought I would continue the cycle,” Santana admitted. “Once I got in the cycle, I didn’t think it would ever stop. That’s all I saw. All I saw was crimes and murders. It became normal to me. Once that becomes normal, it becomes part of you.”

But the support of the Sells, which included intensive tutoring and Doug’s continual positive feedback, has changed that outlook to one of hope, Santana said.

“That showed me that there are a lot of people who care. There is someone out there who does have a heart,” he added.

“That’s what made me strive and keep on going.”

Santana completed his high school courses and will graduate from UrbanPromise this spring. In March, he plans to travel to the ministry’s Honduras site for an internship. When he’s not putting in hours at a tire shop in East Camden, he works with UrbanPromise programs in the city.

“I think he has done very well,” Doug said of Santana.

At an UrbanPromise after-school program in North Camden Thursday evening, Santana playfully chased a youngster down a playground slide. A hat emblazoned with block letters “CAMDEN” was perched atop his head as he and the program leader led the kids in a game of dodge ball.

Santana’s work in Camden has meant less time spent with the Sells. His court-mandated arrangement with the family will end when he turns 19 in July.

But Santana expects his connection to the Sells will never go away.

“They definitely are a second family,” he said.