Last week's election was an exciting one for many reasons, particularly for our young people who voted for the first time! Our UrbanPromise Academy seniors wrote the following story about their voting experience:

Excitedly, the senior class jumped into and out of their caps and gowns, rushing outside into the blustering November wind, and crammed into a bus on their way to their first polling station at Sharp Elementary.

On an average Tuesday morning, the seniors could easily have savored the momentary hiatus of classroom work to take pictures, but this particular Tuesday was Election Day.

“I feel like I’ve made a difference,” said beaming UPA senior Maria Arroyo outside of Sharp Elementary. Proudly wearing an “I VOTED” sticker, Arroyo said that she was “anxious,” prior to voting, but the experience was also “exciting.”

As part of their school's exchange program, Clearview High School visited the city of Camden recently to spend the day with UrbanPromise Academy students. After touring the city, Clearview teens enjoyed a lunch with UPA students, engaged in discussions about shared experiences and challenges, and listened to UPA presentations on the Academy's Students In Action group and UrbanTrekkers.

UrbanPromise Academy's newest extracurricular activity is a school-wide robotics club. Using the fundamentals of math, science, and technology, students are building autonomous robots during the club's twice weekly meetings. They'll begin competing with their creations against other area schools in the coming weeks. Pictured are several club members constructing the robot "chassis"--or base--of their first robot, which they've named "Domo-Inferno."

Each grade at UrbanPromise Academy (UPA) has selected a particular charity or cause to support for the 2012-2013 academic year. Several students and staff participated in October's Making Strides Against Breast Cancer Walk at Cooper River.

In addition to the fight against breast cancer, UPA students have chosen to support Unicef, a Malawian student's education, and the South Jersey Food Bank. Keep up the good work!

Camden, NJ – A group of Haddonfield High School students are raising the annual tuition for a Camden child to attend UrbanPromise’s elementary and middle school, CamdenForward School. UrbanPromise is a youth development nonprofit that serves 600 Camden-area children and teens each year through after-school and summer camps, two schools, experiential learning, and teen job training. The 10 teens became involved in the organization this past summer.

The students’ school group is dedicated to raising awareness about issues that affect Camden, particularly the city’s rise in crime and violence this past year. So far, 54 individuals have been murdered in 2012, and the figure is expected to increase.

The group began fundraising for their student, a kindergartener named Noah, this past September. Their tuition support is processed through UrbanPromise’s Partner Program, which provides a Camden child or teen with a year of quality education at the organization’s CamdenForward School (K-8) or UrbanPromise Academy (9-12). A Partner’s investment of $208 a month, or $2,500 a year, enables UrbanPromise to maintain low tuition for families.

“These students are truly making a difference in the life of one of our children,” Bruce Main, founder and president of UrbanPromise, said. “And they are doing much more than simply paying for his tuition. They are demonstrating that socioeconomic lines and boundaries can be crossed, and a wealthy suburb of South Jersey can find a deep and long-lasting connection to an inner-city like Camden.”

The students met Noah for the first time during UrbanPromise’s annual Fall Partner Day on October 24. They spent the day in the kindergarten classroom and outside on the playground with Noah and his classmates. According to Lindsay McLaughlin, the class “had an awesome time.

“It’s so rewarding to see a group of young people so invested in our kids,” McLaughlin said. “My students keep asking, ‘When are our Haddonfield friends coming back? We love them so much and miss them already!’”

Students created their own bullseyes out of cardboard--the seniors' target, an actual bull, was especially creative and colorful--and attached them to a tree. They then shot their arrows at each target and measured the shots' lengths and angles using modern technology (the iPod) and a more old school tool (the protractor).

The lesson was related to triangles, angle measurements, and their real-world applications. 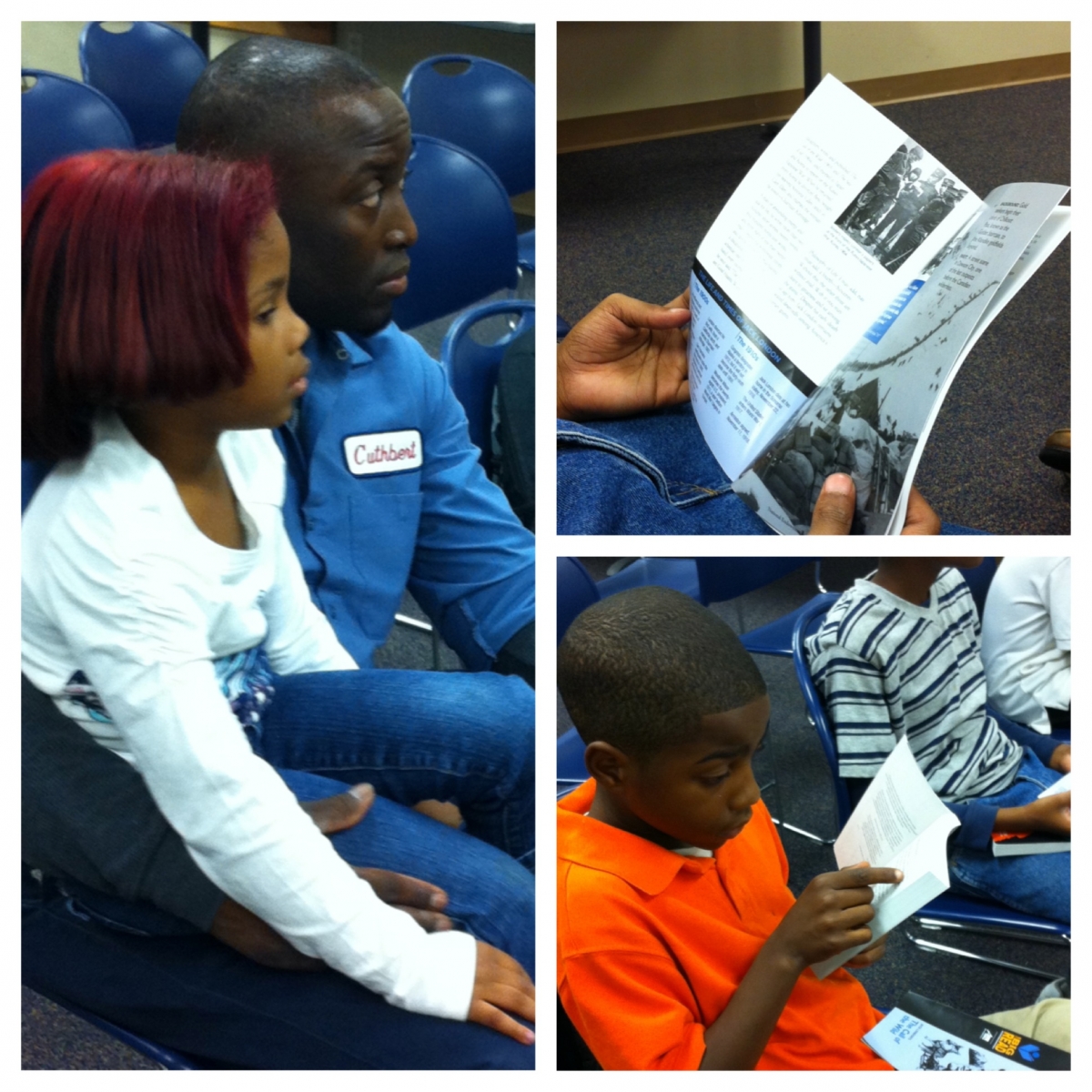 On October 11, residents of all ages joined UrbanPromise at the Ferry Avenue branch of the Camden County Library System to learn about The Call of the Wild and the exciting adventures of Buck the sled dog!

A BIG thank you to the Riverton Lady Golfers!
Friday, October 5 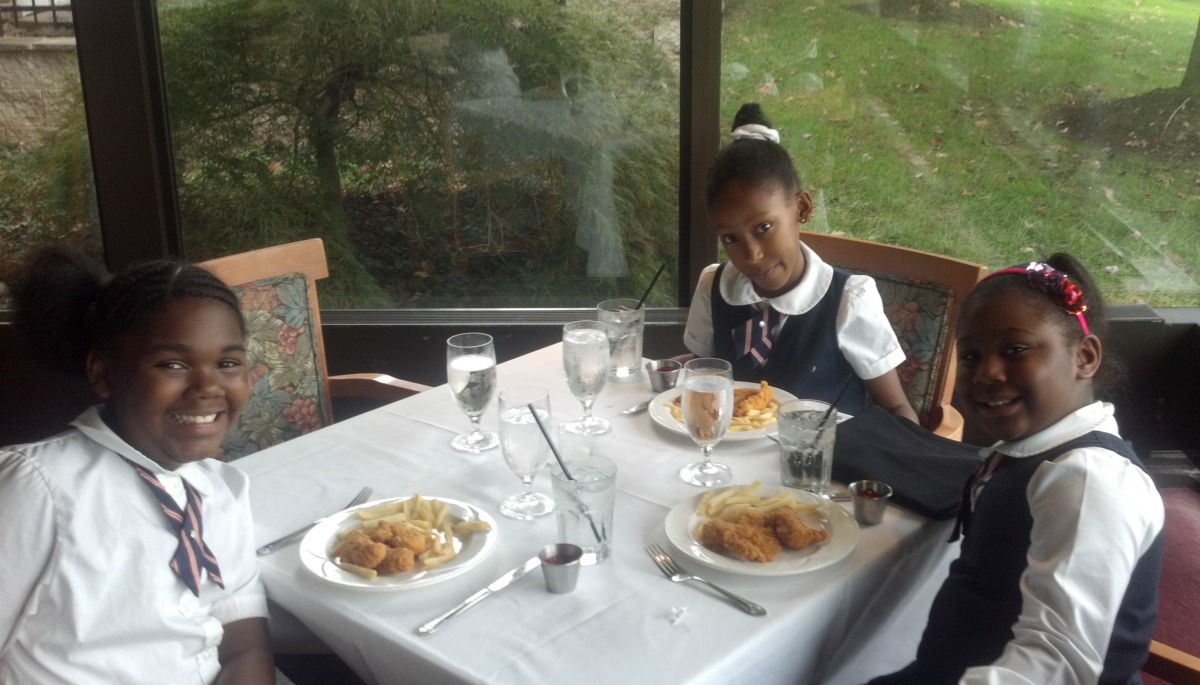 On Thursday, October 4, the women of Riverton Country Club hosted a ladies golf tournament fundraiser for UrbanPromise! The rain held off, the temperature was perfect, the golf was challenging but fun, and the auction items were lovely. All in all, it was a wonderful day!

Our children’s choir was excited to perform and honored to be served lunch in the dining room. Several of our students commented that it was the first time they drank from “fancy” stemware! It was an incredibly nice experience for them and very much appreciated.

We want to extend a special thanks to Michelle Stankovich and the committee who planned the event. More than $14,000 was raised to support our students at UrbanPromise! These funds will offset tuition costs for UrbanPromise students in need of financial assistance.

To everyone involved in the tournament, thank you for supporting our youth!

Camden, NJ (Sept. 29, 2012) – On Thursday, September 27, ABC News’ Diane Sawyer joined UrbanPromise in commemorating the nonprofit’s 25th anniversary in the city of Camden. Encouraging youth to “set the world on fire” and continue identifying solutions to poverty in the city, Ms. Sawyer spoke for 20 minutes during the celebratory banquet program at Collingswood, New Jersey’s Scottish Rite Auditorium. Nearly 1,000 individuals attended the dinner and program in support of UrbanPromise.

“We want to see you do it,” Ms. Sawyer said, encouraging UrbanPromise children and teens to improve the world around them. “Everybody wants to be a part of a big life. We always learn that we’re more alike in our hopes and dreams than we are different.”

In addition to speaking during the banquet program, Ms. Sawyer spent over an hour dining and talking with Camden children and families, whom she first met during her 20/20 special “Waiting on the World to Change.” The first program of the ABC News’ three-part series spotlighted the impacts of poverty, crime, and violence on Camden youth. Ms. Sawyer said her relationship with UrbanPromise has grown ever since.

“UrbanPromise means to me: BFF; best friend for life,” she said.

For the past 25 years, UrbanPromise has provided youth outreach to hundreds of Camden children and teens. Through after-school programs, summer camps, two private schools, job training, experiential learning, and more, UrbanPromise reaches around 600 of the city’s youth each year.

“We create a culture of positivity,” said Alberto Vega, a camp director of the organization’s after-school programs who spoke during the banquet program. “We keep kids off the streets and give them the opportunity for a better life.”

Along with several other UrbanPromise children, teens, and alumni, Vega provided testimony of the nonprofit’s impact on his life and the city of Camden.

In addition to the banquet, as part of its 25th anniversary, UrbanPromise is launching four new initiatives with the goal of providing better services to the youth and families of Camden. Its “Be Promise” anniversary campaign aims to: expand after-school programs, summer camps, and teen jobs throughout the city; make its two private schools (K-8; 9-12) more affordable; increase the amount of college scholarship money for its graduates; and launch the UrbanPromise Wellness Center, which will provide health and nutrition services to the organization’s youth, staff, and families.

The month of October will be filled with stories of survival, struggle, and sled dogs at UrbanPromise! Along with several partner organizations, our youth will be reading Jack London's The Call of the Wild through The Big Read, a program of the National Endowment for the Arts (NEA) designed to restore reading to the center of American culture. UrbanPromise is among 78 nationwide organizations and one of 28 first-time grantees selected to receive grants totaling $1 million.

UrbanPromise hopes to engage a large number of readers of all ages by holding events throughout Pennsauken Township and Camden, New Jersey. Our partners include the Pennsauken Free Public Library, EducationWorks, the Ferry Avenue branch of the Camden County Library System, Rutgers-Camden Universitys Paul Robeson Library, and BuildaBridge International.

"This award is very important to UrbanPromise as it is our first federal funding and is focused on bringing a community together through the reading and study of the written word," said our executive director, Jodina Hicks. "The Call of the Wild includes themes of struggle and survival. Although the setting is different from Camden, the book relates to the challenges faced by our children and teens in the city."

Programs based on the book will be held throughout the entire month of October and will include book discussions, film viewings, a kick-off event that showcases sleds made by UrbanPromise students and live sled dogs, theatre and visual arts workshops, and talks by Rutgers-Camden University professors. Join us for our kick-off on October 6th at 11:00 a.m. at UrbanPromise! The final calendar of events can be found at www.neabigread.org.

We encourage UrbanPromise friends and supporters of all ages and backgrounds to join us as we read The Call of the Wild. Extra copies of the book are available for those interested. Please contact Liz Getman at (609) 202-7638 or egetman@urbanpromiseusa.org to reserve a copy and sign up as one of UrbanPromise's Big Read-ers!

The Big Read is a program of the National Endowment for the Arts designed to revitalize the role of literature in American culture and bring the transformative power of literature into the lives of its citizens. The Big Read brings together partners across the country to encourage citizens to read for pleasure and enlightenment. For more information, please visit www.neabigread.org.