The Impact of an Intern
Thursday, May 31

Only a few people now at UrbanPromise remember Keith Fitzpatrick. I recall Keith as a lanky 19-year-old, topped with a handsome mop of blond hair, who spoke with a funny accent. Keith was from Northern Ireland. It was the summer of 1994. Keith had volunteered to work within our Summer Internship Program—eight weeks of intense missionary service in the heart of Camden. Keith paid for his own flight across the Atlantic, lived communally with 70 other college-aged students in Camden, ate impressive amounts of Oodles of Noodles, ran summer day camps, and loved our children in the name of Jesus. He was well liked. Keith returned to his university at the end of the summer, and over the years, the funny-accented teen became a distant memory for most at UrbanPromise. But one of our “camp kids” would never forget Keith. Carl Clark lived in one of the notorious housing projects in East Camden—a neighborhood known for rampant drug and gang activity. His mother did the best she could to provide for her son, but was diagnosed with cancer during Carl’s childhood.

“Things were tough,” Carl recalls. “My mom was out of work. There was no money for clothes, school supplies; sometimes nothing for food.” DONATE NOW http://upusa.servicenetwork.com/Display.asp?Page=summerintern&adcode=A612 But Keith Fitzpatrick—whose heart had been transformed by his Camden experience—continued to support Carl from afar. “Keith started sending me money for school supplies and food,” Carl said. “He’d always enclose a few Bible verses and words of encouragement: ‘Never give up.’ ‘Keep the faith.’” Despite his family’s struggles, Carl followed Keith’s advice. He never gave up. He graduated from high school, attended The College of New Jersey and studied finance, and went on to work as a banker for 10 years. But 18 months ago, Carl resigned from his banking job and began a new UrbanPromise site in Trenton, New Jersey. Through innovative and engaging programming, Carl has already impacted hundreds of young lives with his after-school and summer camps. Carl attributes a large part of his vocational shift to Keith: “I want to give the children of Trenton what Keith gave me—hope, encouragement, and an example of what it means to live a Christian life.”

The Creation of a Master Boat-builder
Monday, May 21

A couple years ago, at the beginning of the boat-build season, our BoatWorks student's completed a survey about their talents, interests, and learning styles.

I watched as the new recruits answered each question, particularly interested in the responses of an especially eager boatwright, a seventh grader named Kelechi. Peering over his slumped shoulder, I watched as Kelechi answered the category entitled “Working with your hands.” His response? “Awesome.” He couldn't see the smile on my face as I walked away. Kelechi’s ability to work with his hands was evident as he helped create a beautiful sunfish dinghy that year. He became one of our most loyal and focused boatwrights in the shop. At the end of that build season, Kelechi and the same motley group of students who had completed the interest survey just nine months earlier boarded their dinghies for a final on-the-water race—a dramatic end to a year of building and sailing. I watched as Kelechi struggled through a header (wind shift) to round the buoy just fast enough to steal everyone else's wind. He couldn't hear my laughter—or see my pride—as he crossed the finish line. Nowadays, Kelechi—currently part of our “advanced build” class—calls himself the “master boat-builder.” I’d have to agree.

Kelechi has developed particular tricks and techniques that allow for efficiency and ease within the shop. (He likes to put boat-building clamps on his shirt so he can always have one handy.) The walls of his bedroom are adorned with nothing but wood pieces he’s shaped during builds. This past Christmas, the only gifts he asked for were carving tools. He didn't notice the tears in my eyes when he told me he received what he wanted. In a city where young folks commonly engage in crime and violence, and struggle to find their identity, Kelechi has chosen to be a boatwright. Camden was born on the water. Streets coded in maritime vocabulary remind us of the city’s once thriving shipbuilding community. Partially demolished buildings line the edges of the Delaware and Cooper Rivers. Waves smack the riverbanks’ concrete retention walls as if to call us back home. I thank God each day that a middle school boy with clamps on his shirt not only hears that call, but also answers it. Thank you for your ongoing support. Jesus Castro Program Director of Urban BoatWorks

I couldn’t help but think of the inspirational and whimsical Dr. Seuss book, Oh, the Places You’ll Go!, when Terron came by my office the other day.

Home from college for spring break, he stopped in to make sure I had his upcoming graduation from Eastern University on my calendar.  I wouldn’t miss it for anything.  Terron was one of my first students when I began UrbanTrekkers eight years ago. (UrbanTrekkers is a program at UrbanPromise that focuses on expeditionary, hands-on learning.) The two of us began to reminisce about the locations to which we had traveled during his years at our high school,UrbanPromise Academy.  We shared about the first ever UrbanTrekker spring break trip to Mt. Washington, NH—the challenging hikes, moose, and amazing vistas; our journey to Vancouver, BC and Terron’s first time on a plane; the Olympic Peninsula where we came so close to hitting a deer with our van; Florida’s Everglades and their ever-present alligators; our annual end-of-summer trips to Maine that included kayaking off Port Clyde; and that final week before high school graduation, the Senior Rite of Passage, in upstate New York.

I’m often asked by friends and supporters what impact UrbanPromise has on the students with whom I work—city kids like Terron, who likely would never experience the travel adventures that have become an integral part of their high school.  What are UrbanPromise’s program outcomes? people ask.  It’s a fair question, yet not always easily quantified. Thinking of such questions, I asked Terron, “What did those experiences do for you?”  He reflected for a moment, and I could tell he was giving my inquiry serious thought.  He finally responded, “Mr. C, when I was getting ready to begin my studies at Eastern University, what I feared the most was not if I could succeed academically; the scary part for me was whether I’d feel like I belonged.”  Eastern is a private Christian university located in Main Line Philadelphia, PA. It’s a world away from Camden, NJ.  Terron was incredibly nervous as he imagined trying to fit in with the school's students and culture—both so removed from everything he knew. He went on to say, “Everyone knows your story when you say you’re from Camden; it's a story of drugs, violence, and poverty. You are the 5 o’clock news! But I had other stories, too. UrbanTrekkers gave me my stories.” Our conversation returned to his Senior Rite of Passage trip to the Adirondack Mountains and Saranac Lake.  During one afternoon, my friend Bob Harris and I left each senior student on a small island with just the bare essentials; the students were to spend 24 hours in quiet reflection.  There was a severe storm the night they spent alone in their tents on the beach.  Away from the students, Bob and I began to feel anxious as we realized the magnitude of the storm from our camp’s distant shore. Fortunately, it passed quickly and rain began to fall with less intensity.  We were able to get to the beach in a small boat to check on Terron and his classmates.  Terron‘s tent had lost the fly (rain cover) and had two inches of water in the bottom.  We helped him re-situate the tent, find and re-attach the fly, and told him we’d see him in the morning.  I’ll never forget his surprise when he realized we wouldn’t be rescuing him from the island that night.  But more importantly, something else he said stuck with me.  He told me not to worry about him, adding, “I know how to take care of myself. I’ve done it all my life.” Jim Cummings Director of Experiential Learning

Pedal for Promise
Wednesday, May 9

I’ve got a confession to make—mea culpa!—I didn’t think Marissa could do it.

When the UrbanPromise Academy junior joined the high school’s Elite Cycling Team—which included a 12-week intensive training regimen—I had my doubts. Before you call me a cynic, though, let me add that I think the world of Marissa and have always enjoyed her sassy and spunky personality. I’ve known her since her middle school days at our CamdenForward School where she participated in an UrbanTrekker after-school program.

Marissa is an outgoing, vivacious young woman—there’s no question about it. But the Elite Team’s early morning practices, three-month commitment, and 50-mile goal made me doubt she would make it to the end.

But she proved me wrong! With tears of joy in her eyes, surrounded by a cheering section of friends and family, Marissa crossed the finish line and exclaimed, “I did it!”

She accomplished what I never imagined: She completed the Pedal for Promise and our seemingly endless weeks of training, and she did it with a determination and drive that impressed all those who rode along with her. I joined in her celebration after crossing the finish line—a few minutes after she had already arrived.

With 300 riders, a fundraising total of $57,000—and counting!—for experiential learning programs, and a group of young people feeling an overwhelming sense of pride and accomplishment, the event was undoubtedly a success. 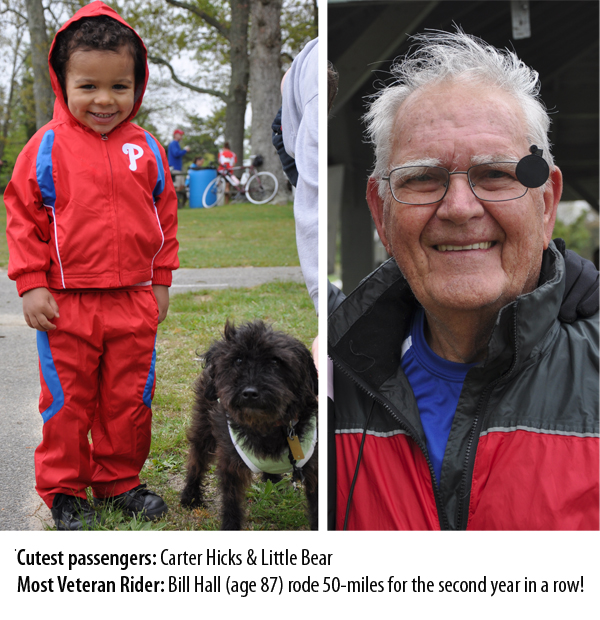 UrbanPromise Elite Team: From the Corner Store to 50 Miles
Friday, May 4 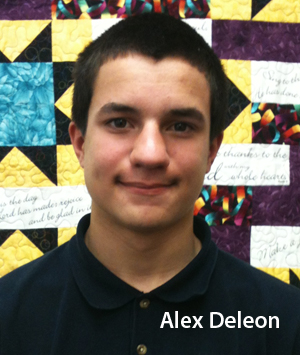 Since March, a group of UrbanPromise Academy high school students have spent each Sunday biking through New Jersey to train for Pedal for Promise. For some, this is their first time on a bicycle—or at least, the first time they’ve traveled any long distance on a bike. UrbanPromise Academy freshman, Alex Deleon, has truly embraced the riding experience—even if his legs are pretty sore Monday morning as he climbs the Academy stairs. Recently, Alex shared that finishing the 50 miles will be an incredible accomplishment for him. “I’ve only ever ridden to the corner store and back home, Mr. C,” he said. “Fifty miles is going to be hard!" It will be hard, but it will also be an unforgettable experience and achievement that Alex will treasure for the rest of his life. Students like Alex need your support and encouragement to make it to the finish line.