From September – January of this year, UPA juniors and seniors participated in a course on leadership, called “Servant Leadership”. During the 6-month course, students explored servant leader attributes; techniques; and examples. They kept journals with their reflections and attempts to display servant-leadership, and they role played characteristics, such as empathy.

The culmination of the course was to complete a leadership project that combined at least 4 servant-leader attributes. Projects included the design of a community mural; a white paper to the Governor’s office on Education Reform; a community mapping survey; and leading a school assembly for K-8th graders. The Holman family generously allowed the 20 students to present their final projects in their BMW dealership conference room. The setting provided a high standard and Donald Trump-like setting for the students….but now all of our students want to own a BMW in the future! 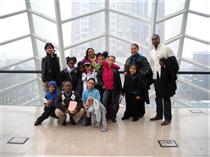 On Saturday, February 5, sixteen students, parents and staff from the UrbanPromise were treated to a morning concert at the Kimmel Center featuring the Philadelphia Orchestra performing a Children’s Concert.  This was made possible through the generosity of the American Association of University Women.

They attended a pre-concert educational event which explored the musical aspects of tempo and dynamics.  The children listened attentively as these ideas were presented in a fun and interactive way.

During the pause, they visited the Dorrance Rooftop Garden and enjoyed the views of the city and also those patrons below in the foyer who “looked just like ants!”

The concert by the Fabulous Philadelphians featured narrator Jamie Bernstein, daughter of composer Leonard Bernstein.  With Ms. Bernstein, the students further explored tempo and dynamics with the entire orchestra performing works of Tchaikovsky, Stravinsky and Mahler.