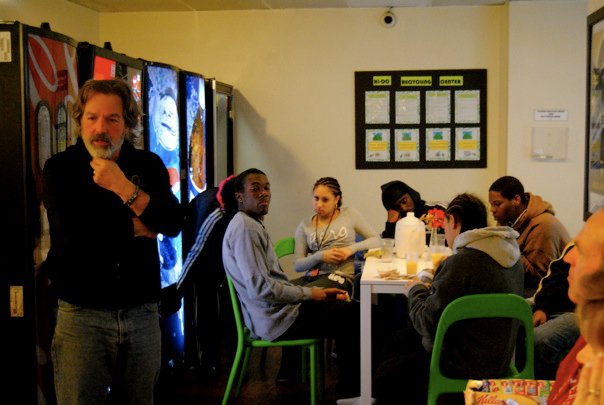 We were all gathered in our meeting room at the International Youth Hostel in Washington DC for our nightly wrap up. There were twenty of us this year, sharing our thoughts and feelings after three exhausting days of hiking many city miles, visiting Arlington Cemetery, memorials, museums, and much more.  Tonight the exhaustion was both physical and emotional; we had been skating in the morning, hiked across the mall to visit the Holocaust Museum and then on to the White House to see the National Christmas tree display.

The conversation became more serious as Mr. Watkins, their history teacher, started asking the students to share their thoughts and feelings about the visit to the Holocaust Museum. After watching actual newsreels of the events from that period as well as interviews with survivors, the students had much to say. Vincent, a senior, and veteran of many UrbanTrekkers expeditions, told us he was in awe of Hitler’s ability to persuade and motivate an entire nation to do the things they did; he asked us to imagine what Hitler could have done if his message was one of love and compassion. Can you imagine? Chris, also a senior, was moved by the quote found on the wall as you exited the exhibit area, from Pastor Martin Niemoller:

One of the more exciting moments on our adventure this year came while riding the DC Metro. When the train came to a stop at our station the doors opened and we quickly exited along with the evening commuters, only to watch the doors close and the train move on with one shocked Trekker still stuck on the crowded Metro car. Quickly, the Trekkers began to panic and suggest we get on the next train to go find our lost comrade. Comments like “Mr. C, this is why you should allow us to take our cell phones when we travel” and “We will never find Bryant in this city” were shouted.  After we got everyone to calm down we began to discuss our options and agreed it would be best to stay put and hope that Bryant would work his way back to us. We went to the Metro Info Center and reported our lost Trekker; luckily Bryant also went to a Metro official who got him back to our stop, and in less than twenty minutes we were reunited and on our way.  Yes, another great teaching moment.