A year to celebrate...
Wednesday, December 29

Thank you for choosing to support UrbanPromise in 2010!

Your contributions helped us to carry out our mission “to equip Camden’s children and young adults with the skills necessary for academic achievement, life management, spiritual growth and Christian leadership.” Together we:

• Employed 70 teenagers in our StreetLeader Program

• Assisted 14 out of 15 last year graduates in successfully completing their first semester of college (and the staff is still working on the last one!) and supported the other 54 former StreetLeaders during their sophomore, junior & senior years in college

• Worked with 50 summer interns and 18 school-year interns, who spent their summer/ school-year in full time service at UrbanPromise

• Helped launch “UrbanPromise Miami” with the help of former StreetLeaders, who served as camp leadership and staff in Miami this past summer

• Were blessed by over 80 consistent volunteers

• Provided thanksgiving meals to 800 people; distributed 1,500 Christmas presents to children who may not otherwise have received gifts; facilitated spring break trips for children and their families

Every day at UrbanPromise is a good day, because everyday lives are being touched; children are safe; young people are learning; teenagers are leading; and God is at work in our midst. Our lives, our community, our children and our youth are blessed by you, as you have allowed this tremendous ministry to open its doors everyday this year.

PPS. If you are interested in giving a year-end gift of appreciated stock, please call my colleague, Lisa McSparron at (856) 661-1700 or email info@urbanpromiseusa.org.

A word of thanks from the kids...
Friday, December 24

Thank you...for helping us deliver hundreds of gifts to youth this Christmas!

Because of your generous donations over 1,500 wrapped gifts—basketballs, skateboards, books, jackets, dolls, shoes, mittens and more were delivered to the homes of our children and families who needed a little extra help this Christmas. (Plus we were able to meet our challenge match of $55,000!!!)

46 students from Ms. Jennifer Satterfield's Humanitarian Studies class at Clearview arrived at UrbanPromise in the morning of December 20th. Mr. Andy Joshua, Director of Children's Ministries at UrbanPromise, led the students on a tour of Camden to discuss the history of Camden and enlighten Clearview students to the socioeconomic issues facing Camden teens.

Clearview students engaged in a Q&A session with one of  UrbanPromise's AfterSchool Program directors, Albert Vega, who grew up in Camden and attended Camden High School.

Upon return to the UrbanPromise main campus Clearview Students had lunch with UrbanPromise Academy (9-12th grade) students, and engage in discussions and various activities led by Principal Demetrius Marlowe.

In the news: The Philadelphia Inquirer
Monday, December 13

Camden children get the gift of giving 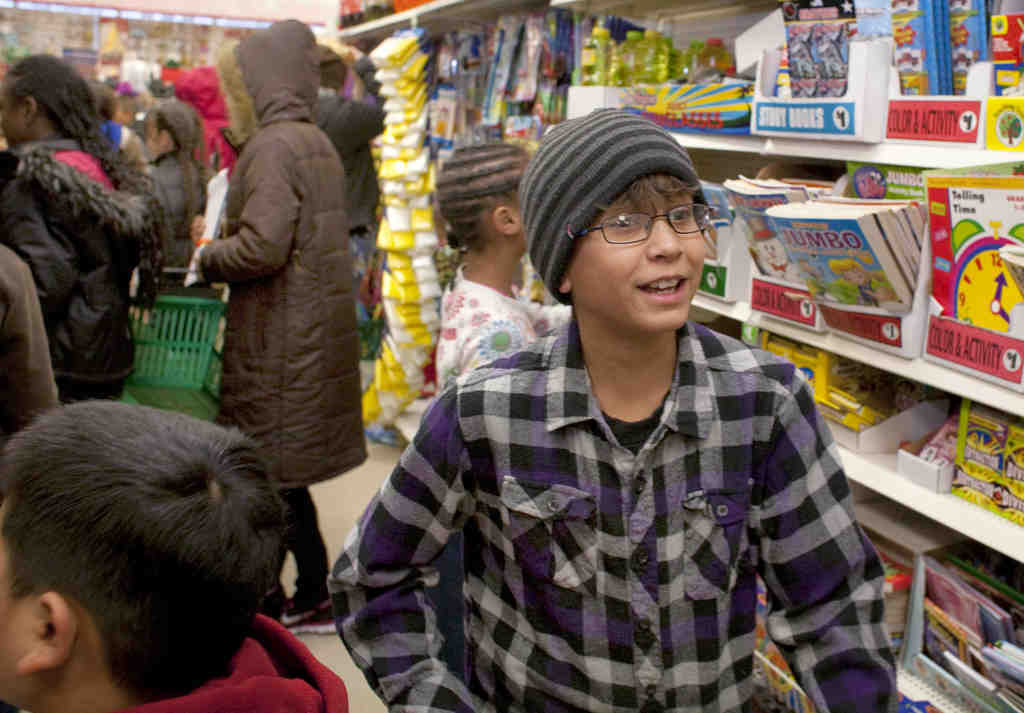 Earnest, determined, and brimming with delight, scores of children trolled the aisles of a store in Camden on Sunday, gathering holiday gifts.Shopping baskets in hand, they picked out dozens of toys and trinkets, carefully weighing each choice.

"This is for my brother," said Ciyani Tokey, 6, as she held up a Disney Pixar cars paint set. She also got him gingerbread cookies and a Santa Claus lollipop.

For her mother, she chose chocolate-covered cherries and a tin of hard candy.

"And this," she said, pointing to a Disney Princess paint book, "is for me."

Ciyani was among 100 children who took part in a holiday shopping spree sponsored by UrbanPromise Ministries, a Christian organization that works with inner-city children. The group paid for the gifts the children selected for family and friends.

"There's just something rewarding about it," said Joshua Brady, who helped organize the event at the Dollar Tree on Mount Ephraim Avenue.

"You feel God's presence when you're watching over kids."

The shopping trip, for children ages 6 to 13, was meant to be a lesson in sharing. "The point is to try to get them to give," Brady said.

With an allotment of 10 gifts each, there was room enough for self reward. But most shoppers seemed to be focusing on others.

Toni Bronson, 10, filled her basket with gifts for her family.

"It's really nice to give to other people," she said.

For her mother, Toni chose a Christmas mug filled with candy. "I just have to figure out how to put it under the tree when she's not looking," she said.

For her 19-year-old sister, she picked up the paperback book, Retail Therapy: Life Lessons Learned While Shopping. For the family dog, Storm, she chose a stuffed pillow that said "#1 Pet."

And for her grandmother in Georgia, she bought a "dreamcatcher," a hanging mobile of feathers and string that when hung at someone's bedside promises to guard against bad dreams.

Her friend Monee Norman, 11, said she was grateful for the chance to buy gifts for her mother. Monee said she had asked her mother for money to buy her a Christmas gift.

"I asked if maybe I could get an allowance so maybe I could buy her something, and she said, 'Don't worry about it,' " Monee said. "But now, I'm going to get her a surprise."

In the end, she settled on a picture frame, a holiday mug filled with candy, violet-scented hand lotion, and a glass flower vase. And she was still able to buy presents for others, including an "FBI kit," complete with toy gun and plastic badge, for her brother.

On hand to help shoppers choose was Will Gass, 21, a volunteer with UrbanPromise who lived in Camden for four years as a child.

"I got out. I moved up," said Gass, who lives in Lindenwold. "But I know what it's like for these kids.

"It brings a lot of joy to my heart to see the smiles on their faces. It's all about the kids."

The 5th grade students at the CamdenForward School have been busy reading books.  The class received 50 new books from Mr. Hoffman who lives in Wisconsin.

"Thanksgiving is my favorite time of year! Family, friends, and food - lots and lots of food," shared Albert Vega, director of Camp Spirit.

Over the last few days, all five UrbanPromise AfterSchool Programs held their annual Thanksgiving celebration dinners. Hundreds of children, teens, parents and grandparents were served! Thank you to everyone who donated gifts, food and time to help make these dinners possible!

The evenings where full of great food, prizes and performances from the youth. Parents and families were entertained by kids who hosted a variety show including singing, a karate demonstration and a short play, "Where the Wild Things Are."

"Even with all that fun," says Albert, "my absolute favorite part of each evening was our turkey give-a-way. We had the opportunity to bless 45 families over the three nights with turkeys with boxes of food. Seeing the pure joy on their faces adds so much to all the great stuff already going on here at UrbanPromise."

A special thanks to Ashland Evangelical Presbyterian Church, Logan Memorial Church, the public schools in Haddonfield and Lockheed Martin Corporation who all helped to make these dinners possible.