Please take a moment to enjoy a video Jennifer Herron, one of our talented AfterSchool Program directors created to illustrate the power of one program in a family's life.

Check out the latest updates, photos, pictures and stories about what is happening with this new organization and the pilot program starting next month.  We wish Matt and Blair all the best. 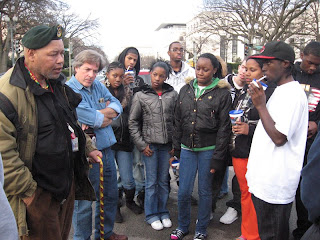 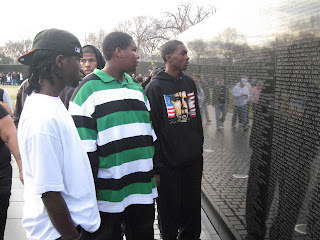 The cold, relentless wind whipped across the Potomac river, rifling down Pennsylvania Avenue, scattering leaves and papers as it came. It was a late-December Washington afternoon.

Leading a pack of scarf bundled teenagers was our UrbanTrekker director, Jim Cummings—Mr. C. to the kids. Annually Jim loads a group of 18 or so UrbanPromise teens into our bus and heads to the nation’s capital for three days of intensive history and museum visiting.

“We were walking down the ramp towards the Vietnam Memorial,” reported Jim when they returned. “There was an aging vet wearing a thread-bare army coat and a fatigued beret propped up against the wall.”

“‘Not so good,’ replied the disheveled Vet.”

From that too chipper greeting the conversation evolved and the students became mesmerized. The vet’s name was O’Donnell Parker. He had fought in Vietnam; after his discharge he said that he struggled to assimilate back into civilian life but encountered unusual difficulty getting jobs over the years. “I have been recently diagnosed with prostate cancer, he added plainly.”

“And who are you kids?” called out O’Donnell, as he watched the teens reading the names of those memorialized servicemen and women who had lost their lives on the battle field. As spokesman, Jim identified that they were young people from Camden in New Jersey, and were a part of a ministry called UrbanPromise.

“Do ya think they might want to learn a little about Vietnam?” said O’Donnell with a glint of hope in his eyes.

The intrigued teens formed a circle around the weary veteran. He quickly created a stunning, terrible picture of what it was like to fight in Vietnam, what it was like to have friends die in his arms, what it was like to return home to find that our country had turned against the war. He showed the kids his amputated fingers—lost when machine gun fire ripped across his body. He was honest about his struggles and the mistakes he had made. Then he challenged the kids to use their lives to make a difference.

Tears rolled down the faces of our teens. History had come to life, their history lessons were now personified in an aging veteran.

“Mr. C,” one of the students quietly asked, after O’Donnell had finished his poignant story, “Can we pray for O’Donnell?”

There was really no need to ask the question. Within seconds the students spontaneously circled their new friend, who was crouched by the black marble memorial. They held hands and offered prayers for Donald’s safety and his circumstances.

“Mr. C,” Jose movingly whispered as the final prayer was uttered, “Let’s take an offering.” With that, the UrbanTrekkers, our impressive teenagers, were digging in their pockets pulling out quarters, dimes and a dollar bill. When the money was carefully counted there was $32. That was a spontaneous worship service at the always deeply moving Vietnam Memorial.

Back home when the students were asked about their most meaningful moment on the Trekker Trip to Washington, it was not the Air and Space Museum, nor the Smithsonian--although they were good—they wistfully said that it was when they were at the Vietnam Memorial listening to the real life story told by their veteran friend, Donald.

It’s because of your special gifts that UrbanPromise is able to create these life-defining moments for our young people in our programs.