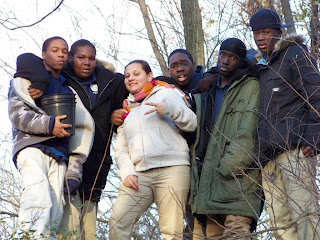 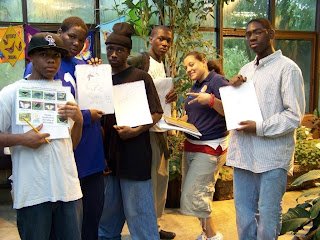 “Hey Mr. C., Miss Julie, look I got my passport in the mail yesterday.” Shahad was beaming as he thrust the official document with its golden imprinted seal on the cover towards us. “I can go anywhere in the world now, right?” “Well, almost”, I replied, realizing the significance the small important looking booklet had for him. Shahad and five of his classmates will be traveling to the Mexican State of Michoacán in February, 2009 to do field research as part of their high school curriculum.

Since September Shahad and his classmates have been part of a new and exciting elective course in our small UrbanPromise high school. The year long course, called “Journeys”, meets twice each week for a total of 3 hours. We’ve been studying the Monarch Butterfly and its migration to winter sanctuaries by using various approaches.

• From a historical and geographic approach, the course takes us into a study of both animal and human migration…we’ve explored topics on the “Great Migration” of African Americans relocating from the south to the northern cities of the United States during the first half of the 20th century. We have looked at issues of illegal immigration and the relationship of the United States and its Mexican neighbor. Our exploration of Mexican history has opened the door to studying pre-Columbian native Aztec and Purepecha cultures. We have also been learning about Mexico’s post-Spanish conquest and contemporary history.

• In the sciences, we studied the life cycle of the Monarch Butterfly while raising, tagging, collecting data and releasing them. We have explored issues of climate change, habitat loss, deforestation, endangered species through field trips to Cape May and the New Jersey Pine Barrens. Students have read, researched and then debated positions centered on environmental conservation/preservation, environmental injustice and economic development.

• In language and visual arts, the Journeys class is learning to observe not only with the eyes of a scientist but also the creative eyes of an artist. They have taken the time to sit quietly in the garden sketching plants and insects alike. They have created poetic verse, learning to wordsmith the myriad of new words and ideas that are revealed through their studies.

Our upcoming trip to the Transvolcanic Mountains of Michoacán will provide our students the opportunity to do field research on pre-selected subjects and to meet with rural Mexican school students who are also studying the Monarch Butterfly and its migration north. Our travels will take us to Mexico City. We will see the art work of Diego Rivera, often described as the greatest Mexican painter of the 20th century. We will visit the ancient ruins of Tzintzuntzan, center of Purepecha culture; Teotihuacan and the Pyramids of the Sun and the Moon including the Tenochtitlan, the ancient Aztec capital city.

In many ways it is the magnificent and miraculous “Danaus Plexippus” (Monarch Butterfly) that is our passport to learning as six young students from UrbanPromise Academy prepare for the journey of a lifetime. This small yet grand, fragile yet incredibly resilient creature has led us to a world beyond our classroom, a world beyond our small urban garden in Camden, New Jersey.